From time to time it is necessary to manually correct the spacing between two letters, i.e. to add some extra kerning. The macro to add this kind of horizontal space is \kern followed by the amount of spacing Since it is a TeX primitive the “argument” must not be in braces and the trailing space is optional.

The following image shows the result: The upper line uses the natural kerning with too much space between letters W and o and the lower line shows the manually correction. 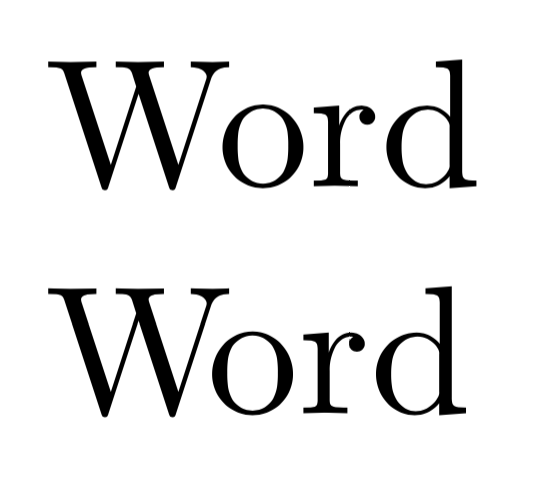 It is suitable to use a font-size-relative length unit like em.

Of course this would be lot of work to do but it is a good idea to at least do it for titles, headlines and such. Furthermore there are typefaces/fonts requiring more corrections than others …

Julien Dutand has written a tutorial about how to export from LyX to MS Word Office XML format (.docx) and LibreOffice OpenDocument (.odt) with bibliography, almost out of the box. It requires a rather new version of LyX (2.1 and above) and the pandoc document converter. The article provides detailed installation instructions, and troubleshooting steps. Once it’s set up, it’s just clicking to Export in the main menu. Very handy!

Another part of the article deals with encoding and gives advice for exporting documents with bibliographies, and explains using bibliography styles with citation style language (CSL) format.

Here is the article: LyX Tutorial: export .docx or .odt with bibliography.

On PCs, tablets and smart-phones you can easily access TeX manuals and documentation via a web site: TeXdoc.net.

What does it provide?

Recently it got an update: read more.

When you encounter some logical markup, i.e. some things that belong to the same “class” and should be displayed equally (like names etc.), don’t use \textit and the like to format them but instead define a new macro to format those things. Then you’ll be consistent and you can change things later on quite easy.

Example
In your text there are lots of names, that should be – at the moment – displayed in italics. Then define a macro \person (or what ever you consider a meaningful name for these things) to format the output:

This gives you the opportunity to change the styling later and even do some fancy stuff like highlighting only the first occurrence of a name or generating an index with those names etc.

Some will say: “But I can just search and replace \textit later.” Yes but not if you used it also to format book titles or other things that should keep the italic format ;-)

etc. Don’t do this! It’s absolutely awful to maintain and in some month when you get back on your document you’ll probably have forgotten what all those shortcuts mean. On a first sight they save some time while typing but that is actually a task for autocompletion and a proper editor. Furthermore things probably get complicated if you redefine (\renewcommand) macros that are already defined without knowing what you do and which other packages rely on the original definition …

It gets even worse if you share your documents with someone else and force them to learn you abbreviations, while e.g. \beta is perfectly clear for everyone. Not to think about a case where two authors use different definitions/abbreviations like

Thus: Don’t use shortcuts instead of the original macros and use “speaking” (meaningful) names for your macros.

If you’re looking for a typeface which can be used with (PDF)LaTeX you my browse The LaTeX Font Catalogue and the topic ‘font’ on CTAN.

When using XeTeX or LuaTeX and the fontspec package it’s possible to use any typeface installed on your computer.

Did you know that the order of the float placement specifiers h, t, b and p, like in

has absolutely no effect? Thus [hb] is exactly the same as [bh]: both allow the float only to be placed “here” or at the bottom but not the top of a page nor on a float page.

The 2016 version of TeX Live (and MacTeX for Mac OS X users) is now available for download at tug.org/texlive (or tug.org/mactex in case of OS X). You can install TL 2016 beside older versions harmlessly and optionally delete the old version(s) afterwards to save some disk space.

PS: Members of TUG and/or dante (and probably other TeX user groups) will receive a copy on DVD. So join the one of them 😉

There’s a new version of TeXstudio available at http://texstudio.sourceforge.net. Here are some of the many changes:

In TeX 1pt (TeX point) is defined as 1/72.27 inch. Many other applications like Word and Adobe InDesign etc. however use a slightly bigger point – defined as 1/72 inch – the DTP or PostScript Point. In TeX this unit is named Big Point: 1bp.